For over a quarter of a century the Amelia Island Genealogical Society (AIGS) has been proud to serve both those seeking information about Amelia Island ancestors and those without local ties wishing to connect with other local genealogists.

Membership has its benefits!

Old Still Cemetery is in Hilliard Florida and has gone by many names including the Davis/Blake Cemetery for the preponderance of Davis and Blake graves. From Hilliard, take County Road 108 east to FAA Facility. This is the intersection of CR108 and CR15A. Go north on CR15A for 1.6 miles. The Latter Day Saint Church is on the left. Just beyond the church is a dirt road, Oak Grove Drive, turn left. Follow the dirt road to the end (.3 mi) and you will come to the cemetery. The cemetery is surrounded by a chain link fence and is reasonably…

The Old Martindale Cemetery, also known as Italia Cemetery, is located between Yulee and Callahan and travel in a 4-wheel vehicle is recommended to reach this cemetery. Turn off A1A/SR 200 between Yulee and Callahan onto the dirt Wildlife Management Road nearest to Payne’s Diesel on the Callahan side. The gate should be open. Continue on the dirt road crossing under high voltage power lines 7/10 mile from A1A/SR 200. Continue until you have gone a total of 1.6 miles coming to a triangular cut about two city blocks long. Take the left fork to the Old Yulee Road grade.…

Oakwood Cemetery is located one mile from the center of Hilliard business district off intersection of CR 108 and Mills Street. Continue on Mill Street, which becomes Catherine Street to Ruby Drive. The cemetery 500 ft along Ruby Drive on the right. Due to the size of this cemetery, it was divided into sections for ease of surveying the cemetery. The survey is by row from East to West. Double tombstones are indicated by showing two names with each number on the inventory. Oakwood Cemetery Location (Nassau County)37349 Ruby DriveHilliard , FL 32046 USA GPS Location: 30.699955, -81.918612

This Cemetery is located in O’Neal Florida. From the intersection of A1A/CR200 and Scott Road, proceed north along Scott Road. Turn right on Calhoun Road which will become Calhoun Way. Go 6/10 mile and the cemetery is on the right. This cemetery includes areas for Yulee, Nassau and O’Neal. Each area has its own caretaker. This cemetery is very sprawled out. The graves are located in nitches cut into the woods. This Cemetery has been inventoried twice, in 1993 and 1998. For the 1998 inventory, the cemetery was divided into three sections, and the graves were numbered within the sections…

The O’Donald Cemetery gravestones were reportedly moved to Jones Cemetery. According to History of Town of Callahan by Mrs. T. B. Wells, the cemetery was located just north of Callahan on the Present US 301. There was a tiny chapel said to seat about six persons, which burned down.

Details:
The following quotation is on the grave of Noah N. Norton: Death…

Details:
This survey was made in May 1993 by Ann Duff, Shirley McCabe, and Joan Johnson.

From Hilliard, take CR 108 West. Go past the school. CR 108 makes a sharp left next to a Minit Market. Take the first paved road to the right, Bay Road, about one block after the market. Go 3.1 miles to Conner Nelson Road and turn right. Go 1.5 miles to Nathalene Drive and turn right onto dirt road to church. The cemetery is behind the church and is enclosed by a chain link fence. Nathalene Primitive Baptist Church Cemetery Location (Nassau County)Nathalene DriveHilliard, FL 32046 USA GPS Location 30.702655, -82.003495

The following information is given on individuals with connections to Nassau County followed by the ancestor chart of James Taliaferro Goodbread who presently lives in Cleveland, Oklahoma. Details of the lineage are given with the ancestor chart.

Provides an Ahnentafel chart of James Taliaferro Goodbread through his Nassau county, Florida roots backwards until he reaches the Nordheim, Germany area in the 1500s.

Herbert Eaustace Goodbread was the fifth child of Phillip Souder Goodbread, Jr. and Mabel Clair Goodbread. He was born on September 29, 1898 in Nassau County, Florida, and died in Tucson, Arizona, on June 28, 1986. 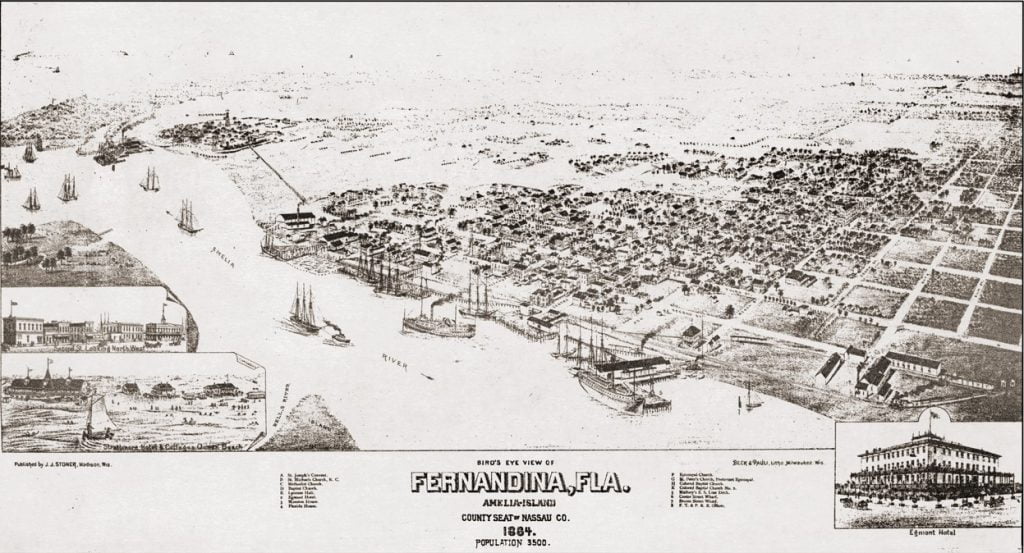 A description and image copy of the 1884 hand drawn lithograph Bird’s Eye View of Fernandina, Fla.
« Previous 1 2 3 4 5
Scroll to Top

Please confirm deletion. There is no undo!