During our Annual Meeting, on November 15, members had the opportunity to talk briefly about a family heirloom or tell a family history, as part of our traditional show-and-tell. Marcia Pertuz started us off with a PowerPoint presentation on town bands in the early 1900s. We also learned that in NY State each city, town, village, or borough has a town historian, who can be an invaluable source of information. Jim Shroads put time, place and information into context, based on a 90-year-old newspaper that he had found under his house during renovation work. Jean Mann went even further back in time. She showed us a 19th century Nassau County ballot box, and explained how elections were held in those days. Gus Reinwald told us the story about his father’s uncle, an inventor and held many patents, in particular of carnival rides which he opened all over the US and Canada. His story was illustrated by many photos, drawings and other documents. Finally, Dennis Partridge described the accomplishments of Thomas Hanson Braddock (1931-2022), culminating with his induction into the Florida Agricultural Hall of Fame. Tom had given Dennis a pair of expensive boots, but as Dennis concluded: “I fit in Tom’s boots, but I don’t think I’ll ever fill them”. We thank all the presenters for their very entertaining and informative contributions. 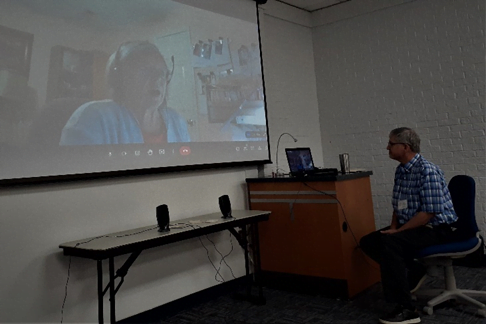 Our October 18 program was a virtual presentation on Finding Women in County, State, and Federal Records: What You Really Need to Know by Margo Fariss Brewer. The presentation was followed by 26 attendees in the Library meeting room and 3 members who signed in from home. Despite some technical difficulties, Margo gave us a comprehensive overview of various records that are most likely to include information on female ancestors.

On Tuesday, September 20, we were treated to an informative and very entertaining presentation by Joel Warner, President of the Jacksonville Genealogical Society.  Joel had come to Amelia Island to talk to us about four cases he had worked on during his research in England.  He managed to involve the audience, while identifying flukes, errors and wrong assumptions, and demonstrating how perseverance and luck may help to solve problems. Thank you, Joel!

On Tuesday, July 19, an audience of 33 (including 7 guests) was treated to a highly entertaining and enlightening presentation by Sharon Clark Driscoll. Using her own DNA tests through AncestryDNA and 23andMe as examples, Sharon showed us the tools that are available to confirm ancestry lines, in particular the Shared cM Project 4.0. She also described a genetic health risk report provided by 23andMe, which reveals your risk level for developing certain health conditions.  To those who attended, as well as those who missed it, we recommend visiting the DNA Painter website: https://dnapainter.com/ Thank you, Sharon, for helping us to demystify our DNA results! 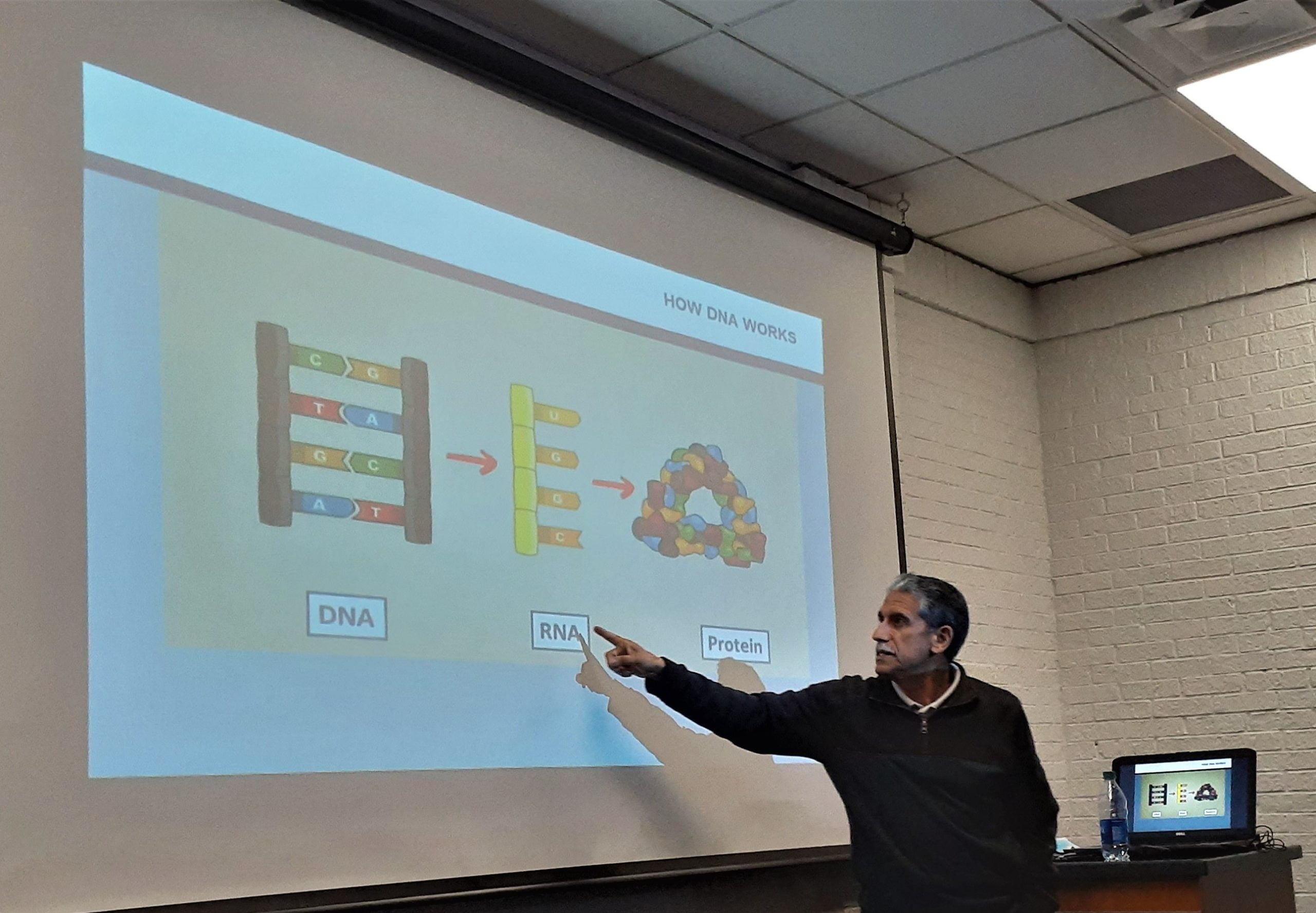 We almost had a full house for our monthly meeting on Tuesday, February 15, which was attended by a total of 52 people, including 20 non-members! The audience listened to Medardo Monzon’s presentation “The Genealogy of Genes”, a fascinating story about the discovery of DNA.  Using simple props and historic photographs, Medardo explained what DNA is, and how the puzzle of this remarkable molecule was solved. He also described the different types of DNA genetic testing, and showed how his own DNA test results encapsulate the story of human migration. Finally, he explained how COVID-19 mRNA vaccines teach our cells how to make a protein that triggers an immune response inside our bodies, without entering the nucleus of the cell where our DNA is located. Thank you very much for a great presentation, Medardo!

AIGS started off the new year on January 18 with a presentation by Past-President Jean Dixon Mann. No less than 38 attendees, including several new members and 13 non-members (welcome!) were treated to the fascinating story of the family of Domingo and Mary Fernandez who once owned large plantations on Amelia Island. Their descendants still retain ownership of probably the Last Spanish land grant in Florida, which constitutes one acre between St. Michael’s Church and St. Michael’s School between North 4th and 5th Streets.  Jean had traced many of these descendants, not only in Florida, but also in other parts of the world, and told us their interesting stories. Thank you very much, Jean!

During our Annual Meeting on November 16, members had the opportunity to talk briefly about a family heirloom or tell a family history. As always, the presenters did not disappoint, but treated us with a variety of funny and interesting stories. An old Vortalex fan blade; an even older gravy bowl; a handwritten letter about the history of the First Baptist Church; a poem from great-grandma’s wooden scrapbook about the arrival of Rayonnier; the many applications of a Scottish hat; the search for a husband’s elusive family; a couple of great-grandparents who were literally clowning around; and a distant ancestor who operated as a Barbery pirate, these were the topics of the presentations. Our thanks go to Frances Bartelt, Jim Ramage, Betty Waas, Valerie Davis, Gus Reinwald, Jean Mann and Jim Shroads for their very entertaining contributions.